The Value of Lasting Friendships

By: Barbra and Larry Dolci

On the evening of September 11, 2001 we received a phone call from a former student of the Command and General Staff College. The purpose of that call, from the Portuguese officer we had sponsored at CGSC, was to provide support and reassurance after the terrorist attacks earlier in the day. In the next few days we would receive similar messages of support from several other CGSC graduates.

Although it has been almost sixteen years since the events of 9/11 the memory of the support we received from around the world after the attacks remains one of the most powerful memories of our time as sponsors of International Military Students. To say we were moved by their expressions of support would be an understatement. They were expressions of the sincere friendships we had established thanks to the sponsorship program at Ft. Leavenworth.

We have sponsored 30 officers at CGSC during the 28 years we have been involved in the program. Thanks to changes in technology it is much easier to maintain contact with the officers we have sponsored. The first contact we had with the first officer we sponsored was by long distance phone call from Saudi Arabia. Now, Facebook, email and various other forms of technology have allowed us to keep in touch with our officers in ways that would have been unheard of a few years ago. Just today we had news of two of our officers. We learned through Facebook and email that LTC Barbara Honig of Canada will be in charge of the Engineer School at the Combat Training Centre, in New Brunswick, Canada and that LTC Mntenjele of Tanzania will be posted on the border with Rwanda and Burundi as District Commissioner for Ngara.

One of the real joys of sponsorship has been the opportunity to follow the careers of the incredibly capable officers we have sponsored. To date six of our International Military Students have become general officers. Many of these officers have served in highly responsible positions in the war on terror and have received many decorations for merit and valor from their armed forces and in some cases from the United States as well. 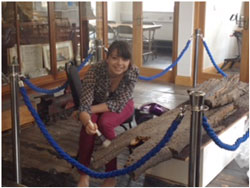 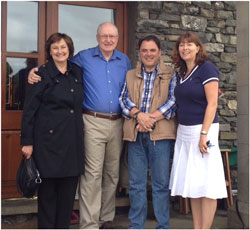 Another special benefit for us has been the chance to watch the growth of the children of our international families. Four of our sponsored families had babies while assigned to Ft. Leavenworth. We have been able to visit five of our families in their own countries and to see their children with their own careers and families. A few years ago we were able to visit one of our British officers and to see the beautiful seventeen year old daughter, Elspeth, whom we remember as a new born at Leavenworth. In the first photo, on the left, Elspeth is doing volunteer work in a museum near her home in the Lake District of England. On the right, Elspeth and her parents are shown in a photo that we took during our visit. 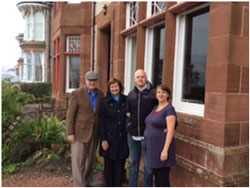 The lower photo on the left is of another British officer we were able to visit in Scotland.  We were guests of the officer’s family on the lovely Isle of Bute.

As we mentioned above hardly a day goes by without a Facebook or email notification with news about one of our international families. The sponsorship program offers so much to the United States, international families and sponsors. One of the greatest benefits to us has been the establishment of lasting, genuine friendships around the world.