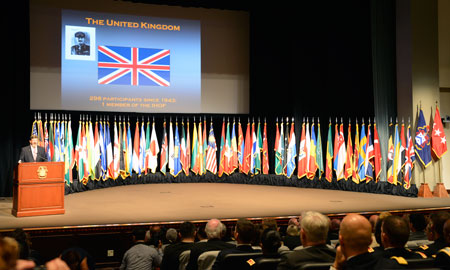 The Flag Ceremony for international military student class of 2023 starts at 9:30 a.m. on Monday, August 8. It will be held indoors at the Lewis & Clark Center. The event will also be streamed on the CGSC Facebook page.

The ceremony honors the new class of international officers, and officially opens the new year at CGSC. This event is open to the general public, however, visitors must comply with the Fort's current base access policies.

There will  be golf carts running from the upper parking lot to (and from) the Lewis & Clark Center. There will no buses for shuttling attendees.

The ceremony starts at 9:30 but sponsors should arrive at 9:10-9:15 to get a seat by 9:25.  Arrive no earlier as the security sweep is scheduled between 8:30-9:00 and doors will be locked until 9:10. Please don't give gifts, take photos, etc. before the event as the Fort needs the IMS to focus on the event and scheduling.

There will be a formal reception after the event where sponsors can interact, take photos, give gifts and have some food with their IMS.

Note: The Fort Leavenworth guard booths at Grant Gate are currently being replaced. During construction, lanes at Grant Gate will be closed in succession, changing inbound traffic patterns. This work may or may not be complete by the date of the flag ceremony. The Fort does not expect the construction to be overly burdensome.

The 114 International Military Students, some countries have multiple participants, includes the first officer from Fiji to attend the course. The Republic of Fiji is in the South Pacific. It is an archipelago of more than 300 islands famed for rugged landscapes, palm-lined beaches and coral reefs with clear lagoons. Its major islands, Viti Levu and Vanua Levu, contain most of the population of more than 900,000. Viti Levu is home to the capital, Suva.

International military education at Fort Leavenworth began in 1894. Since then, more than 8,000 International Military Students from 166 countries have attended classes alongside their United States counterparts. CGSC’s international graduates have been extremely successful in their military careers. Nearly half achieve general officer rank.