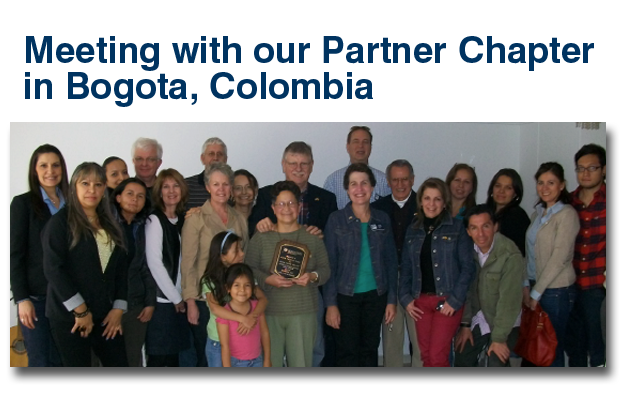 Nine members of the Greater Kansas City People to People Chapter traveled to Colombia to lend a personal touch to the establishment of a PTPI partner chapter relationship with PTPI Bogotá. President, Karen Haber, and her husband Chuck, headed the local group that included Gene and Linda Jacobs, Dak and Pat Burnett, Paul and Maggi Choplin, and Jim Malouff.
Arriving a few minutes early, after nearly missing their connecting flight in Atlanta, group members were warmly welcomed by members of Colombia's military and their families, with noisemakers, signs and lots (and lots) of confetti. Expedited accomplishment of immigration procedures was spearheaded by the Army, bags were collected, and the group quickly was on a special minivan provided by the Colombian army and on its way to the Club Militar to check into its new home for the coming days.

Claudia Farfán, wife of BG Rubén Alzate, was the prime planner and facilitator for most of the accommodations and activities that awaited the Kansas City crew. She also was the primary liaison with the Bogotá chapter in arranging the meetings between the two PTPI groups.

Members of the Colombian army who attended the command and General Staff College at Fort Leavenworth were eager to show their former sponsors and other GKCPTP members everything that is good about their home. They wasted no time by hosting a barbecue atop a hill on the military base the very first full day in Colombia. BG Andrés Bernal along with his wife, Martha, and their three sons; Col. Juan Correa, his wife Paola, and their son, and Col. Gonzalo Herrera, and his wife, Claudia, along with their son and daughter, were the key participants along with BG Alzate and Claudia.

Kansas City chapter members with met with their Bogotá counterparts on Monday, where mementos were exchanged, including a plaque commemorating the meeting, presented to the Bogotá chapter president Claudia Chona by Karen Haber. There was live entertainment, home-cooked Colombian treats, and libation that cleared the sinuses.

President Chona reported that her chapter listed 35 members, which was larger number than anticipated. A large portion of that total was on hand for the initial meeting, and again the next day, when the GKCPTP group join the Bogotá members in a poor section of the city to distribute nourishment to a large number of homeless people and then at a local nursing home for aged indigents sported by the chapter.

The warmth of the newly established relationship between the PTPI members from the two separate continents became rather quickly apparent. The number of Bogotá members who originally had signed up to attend the concert later in the week with the Orquesta Filarmónica de Bogotá, under the baton of Andrés Franco, former conductor of the Philharmonia of Greater Kansas City, more than tripled after the initial meeting.

Sumptuous dinners and great tours of local attractions were on the agenda. Then there was an unbelievable trip to a picturesque village called Villa De Leyva, where celebratory dancing in the streets to the Latin American rhythms amplified by power draining speakers resulted in the death of the party bus battery. Finger snapping, laughter, and libation did not abate at all while a replacement vehicle was summoned to transport all those who "smile in the same language" onto a midnight repast.

In addition to getting to know the members of the partner chapter, a tour of the President's Palace, Mass at the Military Academy, and a "quiet dinner" with 2,500 salsa dancing Colombians at a place called Andres' Carne de Res ranked high on the list of favorites during the conversations as the week progressed. "I just couldn't stop smiling," confesed Pat Burnett when reporting her favorite activity.

To say that those who signed on for the excursion had a good time would be the largest understatement in the chapter's history. All members were seasoned travelers; and comments like "The best trip ever!" And "How could we ever top this?" Became a litany amongst those who shared the experience.

The group already has reunited once since its return to host Claudia Farfán, who currently is visiting her daughter, Maria Paula, a student at Park University. Such was the camaraderie that future reunions are in the discussion stages. Could it be that these sorts of travel opportunities for chapter members might find a place in future chapter planning?