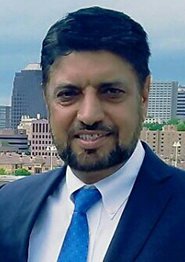 My Life: Serving Others is the Ultimate Earnings of Life.

I was born in Islamabad, Pakistan during the 1965 war between India and Pakistan. I opened my eyes as my city was getting bombed by Indian fighter jets. I survived along with my family and grew up in the rural area of Islamabad. I earned a Bachelor of Arts in Economics and Political Science from the University of Punjab, Pakistan in 1986. I tried to continue my education in Law but I was bitten by the journalism bug and joined an Urdu newspaper in Islamabad in 1987. I served as a senior journalist in different newspapers and news agencies in Islamabad, Pakistan, from 1987 to October 1993. During my career as a journalist, I covered education, health, crime, the supreme court, defense, foreign affairs and human rights beats. I received the best Urdu health news reporter award from the World Health Organization Islamabad in 1992. I also served as the Unit Chief of the Rawalpindi Islamabad Union of Journalists from 1989 to 1993.

By the invitation of the British government under the commonwealth program, I visited HM Prison Holloway and HM Prison Manchester, United Kingdom. I met with the Deputy Governor of HM prisons and had discussions along with a tour of the Prisons Strangeways. During this visit, I also met with members of the British Parliament, NACRO UK, Amnesty International, British Judges and HM Chief Inspector of Prisons to discuss prison reforms in the UK.

I moved to the United States of America in 1993. In business, I started my life from scratch. I worked at different restaurants as a manager. I started my own business under Zee Technology Inc. in 1998 and opened a chain of “Computers Plus” stores in the Kansas City metro area. In 2004, I started my real estate business and started practicing after getting a Real Estate license from the states of Kansas and Missouri. I am currently working with Chartwell Kansas City Realty. The real estate market has gone through many ups and downs but for me every business year is better than the previous year. I took the oath of US citizenship in 2008. I am married and living with my beautiful wife, daughter, son and a cat. My life goal is to serve others in every field and earn their blessings, that is the ultimate earnings. Money can help you live a comfortable life but ultimate peace comes by serving, helping, caring and loving other human beings.

I started my volunteer work by helping my own Pakistani community living here in the KC metro area and serving as the General Secretary of the Pakistan American Association of Greater Kansas City from 2005-2006.

I joined GKCPTP in 2009 with the aim to leave the best image of the United States of America on International Military Officers during their stay at Fort Leavenworth, Kansas. I have been proudly sponsoring International Military Officers at CGSC for the last nine years. I am currently serving as a board member and secretary of GKCPTP. I received the "Excellence of Five Years Service" award from the US Army Command and General Staff College Fort Leavenworth in 2013.

In July of 2014 the Kansas City Star published a story on the Business page about my life in America; “Businessman finds U.S. is still a land of opportunity”. https://www.kansascity.com/news/business/article706443.html